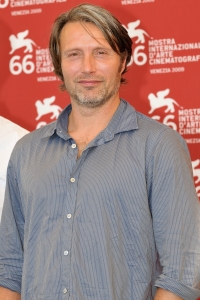 Mads Dittmann Mikkelsen (born 22 November 1965) is a Danish actor. In May 2012, he won the Best Actor Award at the Cannes Film Festival for his role in the film The Hunt.

Mikkelsen was born in the Østerbro area of Copenhagen, the son of Bente Christiansen and Henning Mikkelsen, a cab driver. He is the brother of actor Lars Mikkelsen. After attending Århus Theatre School, he made his film debut in the movie Pusher. He has starred in popular Danish movies such as Flickering Lights (Danish: Blinkende lygter), The Green Butchers (Danish: De grønne slagtere), Adam’s Apples (Danish: Adams æbler), Valhalla Rising, his film debut Pusher, and Pusher II. Mikkelsen’s longest running role was as a policeman in the Danish television series Unit One (Danish: Rejseholdet). He also starred as Tristan in the Jerry Bruckheimer production of King Arthur, as well as playing the villain Le Chiffre in the 2006 James Bond film, Casino Royale. Also in 2006 he took the lead role in the Oscar nominated After the Wedding (Danish: Efter brylluppet).

In 2008, when the Quantum of Solace video game was released, Mikkelsen reprised Le Chiffre, voicing the character throughout. Also in 2008, Mikkelsen, along with fellow James Bond villain Richard Kiel, was invited by Swiss watchmaker Swatch to Bregenz, Austria to present the Swatch 007 Villain Collection.

In 2010, he starred in the remake of Clash of the Titans, as Draco, the leader of the king’s guard alongside Sam Worthington.

In 2012, he won the Best Actor Award at the Cannes Film Festival for his role in the film The Hunt.

He is set to star in the new 2012 TV series Hannibal as Dr. Hannibal Lecter opposite Hugh Dancy as Special Agent Will Graham.

In 2013, upcoming projects he is involved in include The Stolen [IMDb / Official Site] and The Necessary Death of Charlie Countryman [IMDb] with Shia LaBeouf and Evan Rachel Wood.