David Slade teases this from his final day of shooting last week. 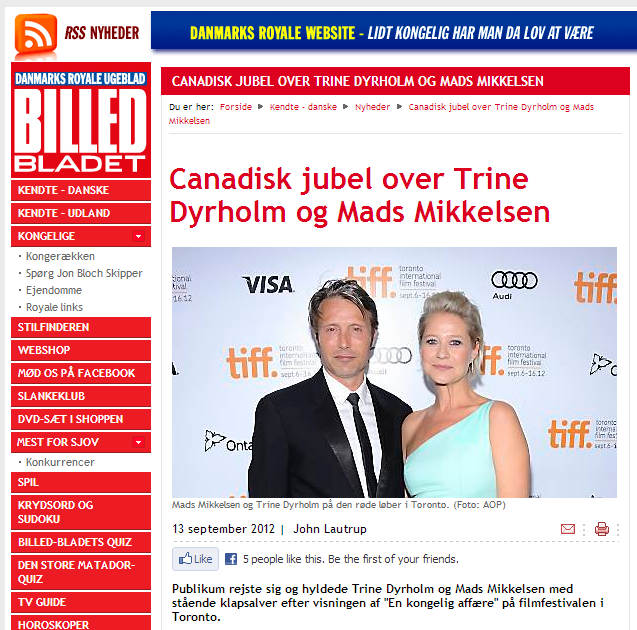 Mads Mikkelsen is no newcomer to the business of Hollywood, but his under-the-radar quality might have led you to believe otherwise. In truth, he’s starred as a Bond villain (Casino Royale), a mythical Greek (Clash of the Titans), a Russian musical genius (Coco Chanel & Igor Stravinsky), and has achieved bona fide stardom in his native Denmark, so it’s surprising that Mikkelsen is not yet a household name in the U.S. Two significant projects on the horizon may change that. First up is The Hunt, the film that garnered Mikkelsen a Best Actor award at this year’s Cannes Film Festival for his role as a kindergarten teacher falsely accused of child abuse. More commercial, but no less dramatic, will be Hannibal, the much-anticipated NBC prime-time series based on Thomas Harris’s cannibal psychiatrist. Mikkelsen will take on the title character of Dr. Hannibal Lecter with Hugh Dancy opposite as Special Agent Will Graham (played by Edward Norton in 2002’s Red Dragon). Say hello to your next leading man.

“Everything I’ve done is a stepping stone to what I do today,” he told LAT’s John Horn at a Telluride Q & A right before moving with his family to Toronto for a year’s shooting on the new TV series “Hannibal.” “We get away with a lot,” he promised.

The Reel Breakdown on Yahoo:

Danish actor Mikkelsen does double duty at TIFF ’12. In “The Hunt,” he portrays a kindly kindergarten teacher who’s been accused by one of his students of exposing himself, and his close-knit rural community unravels with accusations false and true. In the historical romance “A Royal Affair,” he plays a German doctor who charms the crazy king and beds the queen. He won best-actor honors at Cannes this year for “The Hunt,” and he was honored at Telluride along with Marion Cotillard who gives a great performance in “Rust & Bone.” Mikkelsen, 46, is a cross between Viggo Mortensen and Ciaran Hinds — intellectual, physical, sexy. I’m calling a best-actor nomination for Mikkelsen now. Think of it this way: This time last year, I couldn’t pronounce “Jean Dujardin” (of “The Artist”), much less spell his name. What a difference a year can make.